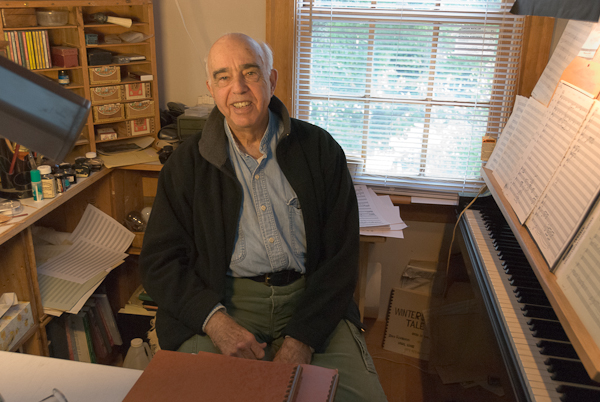 Yehudi Wyner’s Life in Music: a Composer with Piano Hands

Yehudi Wyner’s Life in Music: a Composer with Piano Hands Yehudi Wyner is an approachable guy in a forbidding field: contemporary “serious” music. He gives us an opening here to ask where new sounds come from. In his case new music comes out of a sort of compost of the canon, from Bach to Bartok, and then everything else he’s heard over 80 years, from his father’s Yiddish art songs to boogie-woogie and gospel music. “Somehow it registers in the brain and has an effect,” he says of the past. The other big thing you’ll be hearing from Yehudi Wyner is that his music has its very bodily beginning in his hands. It’s a physical, almost gymnastic test of what ten fingers can do, want to do, find themselves doing.

The centerpiece here is the Pulitzer Prize piano concerto that was a Grammy finalist this year, “Chiavi in Mano” (or “Keys in the Hand”). Yehudi Wyner wrote it for the Boston Symphony Orchestra and the pianist Robert Levin, “Mozart’s nephew,” as we call him here, the man who has presumed to fill in some missing elements in the “unfinished Mozart.” The one-movement “Chiavi in Mano” begins with an introspective piano solo and ends with an orchestral boogie-woogie. In between is a roaring contest of the elements. “For Bob Levin,” the composer laughs, “it’s just a skirmish, a war game with dull bayonets.” But all of it — in Yehudi Wyner’s unveiling of his process — stems from the simplest contrast of intervals between keys on the piano: the major and minor “third” between, say, C and E, then C and E-flat. It’s as simple and as grand as that: using a cellular structure to build something new and various, as different and connected in its parts as your nose and your toes.

The privilege here is to sit at the piano with a man who can think and play and talk all at once:

CL: You were playing a Bach Partita when we walked in. What does that daily dose do for a man?

YW: It gives him the feeling that he’s in touch with the greatest possible art: physical, mental, spiritual, integrated, and above all, healthy. Bach was really, I think, the greatest artist and possibly the greatest specimen of human being and thinker who ever was conceived on earth.

CL: Does the composing happen, Yehudi, between hands and ear, or do you write it with eye and pencil?

YW: Hands and ear. Hands, ear and pencil. And instrument. I work at the piano. The model for me is the indescribable, sensuous, as well as intellectual joy of dealing with Bach or Mozart. Other composers too, of course, but they above all, where every moment at whatever level of struggle… has a satisfaction, always is nourishing. I do this at the instrument and test it and feel how durable it is, how much I can stand repeating something without finding it exhausting or boring, then I think I have achieved something, I’ve found something, I’ve stumbled on some material that’s worthwhile.

CL: Is there a gold-standard “perfect” piece of music out there for you?

YW: No. If you want to say, are there 1000 pieces from the canon that I love beyond description and can find no fault with, I would say yes. But I do not feel there is one.

CL: Yehudi, give us a report to the ancestors, so to speak. A decade into the 21st Century, what’s the state of this art?

YW: I came back from the Grammys two weeks ago feeling there is very little affirmative music in contemporary America, and has not been for the last fifty years, because what passes as affirmative is really rather imperial and militaristic. It all comes from a kind of big-band, I mean marching-band society, and it blares and it proclaims, but it doesn’t really affirm. It ascribes to the affirmation that Beethoven would have, but it fails all the time because it’s very superficial and aggressive. And that applies even to the music of people we admire, like Copland and others. But it occurred to me — with all the jazz references in “Chiavi in Mano” — that that’s where the true affirmation in American music is. It’s in popular music, it’s in jazz, it’s in gospel. That music is so self-sufficient, it never proclaims its affect, or its message. It just is the message.

The music that is being promulgated, that is being produced and broadcast most widely, is aggressive, very shiny, very egocentric, very repetitive, and noisy, busy, and in some ways, mindless. It’s very physical. The problem not that that music exists, it’s that that music has inundated our culture and our youth. When you finish being conditioned by that music, there’s very little capability of any kind of other sensibility. You’re no longer sensitive to things that move at a slower pace, things that are nuanced, things that have complication and things that have lots of reference to the past.

CL: What’s the chance that we’ll get composers’ music in the public ear again — even in the manner of Copland and Gershwin?

YW: I think for the foreseeable future the chances are very slim. In the long term, things change. Certain cultures collapse and others come up, the convention of the concert hall and the function of concert music and art music is not a permanent given. The audience is certainly shrinking and certainly aging. Those things are incontrovertible. The thing that persuades us that there are possibilities for other things is the ubiquitous presence of music: people have it on their iTunes, they have it constantly at their beck and call. There is this phenomenon… people coming out of schools and forming small groups here and there, and somehow keeping the art alive, perhaps as the monks kept ancient art alive in the monasteries, in isolation during the middle ages. But I think for the foreseeable future there is no possibility for an Igor Stravinsky or a Shostakovich, or an Aaron Copland, or even an Ives on the general public screen.

Yehudi Wyner at his piano bench with Chris Lydon in Medford, Massachusetts, February 18, 2010. 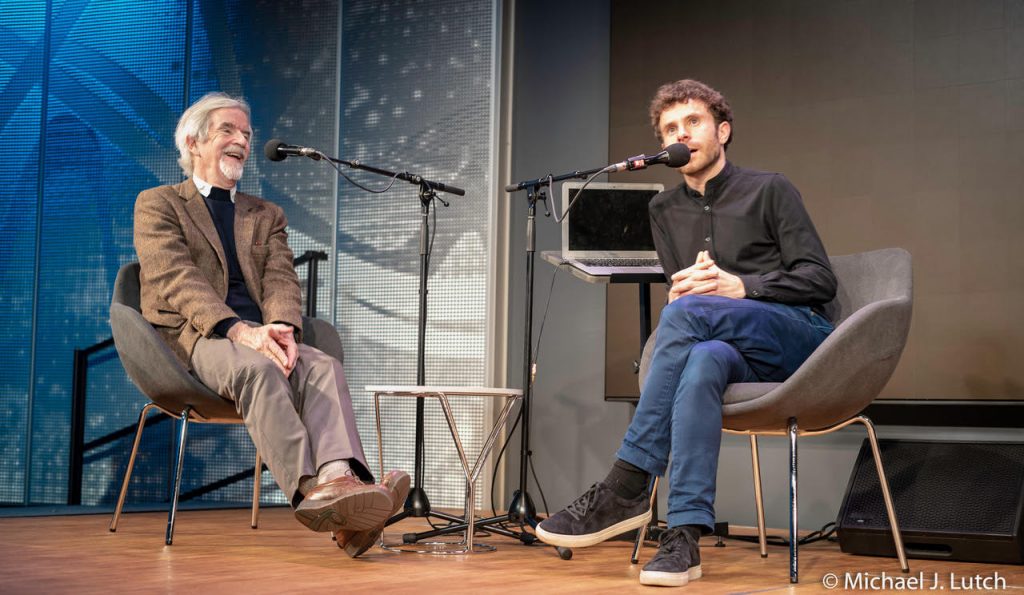 Composer Matt Aucoin stands for the proposition that the kid playing baseball next door in Medfield, Massachusetts, can grow up to be all music, all the time: mind, heart, spirit,...