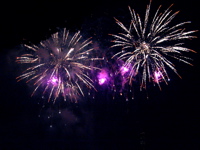 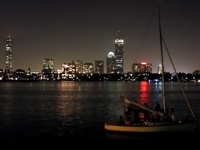 Some scattered impressions of my July 4: Steven Tyler’s voice, piped live to the entire Charles River Basin last night, sounded a little old. It made me sad. The 1812 Overture — say what you want, Brahms snobs — is the best piece of music ever written. (A close second might be Guns ‘n Roses’ “Paradise City,” but I can understand why “Paradise City” might have been a bad choice for the Boston Pops last night.) Also, walking with the wind down the Charles to find my picnic last night, I was passed by a canoe on the river filled with a dad and three sons, powered alone by the oldest son’s windbreaker, held aloft as a sail.

Yesterday afternoon Brendan and I were walking through Harvard Square when we came across Alexander Brian Arredondo and his truck. The sight of his flag-draped casket and trailer filled with...

[darkmatter / Flickr] In the world of photo sharing, Flickr is king. We rifle through their files every day to find companion art for our show posts. Sometimes we’ll get so...