LAHORE — Zeb and Haniya could set you to wondering all over again why musicians aren’t asked to run the world. In their studio in Lahore, we are puzzling how they make it look so easy to teach us new songs to call fresh tunes on stage — as so few can do off-stage? It’s a version of the question you ask yourself watching the Ramallah Concert by the fusion orchestra of young Arab and Israeli virtuosos that Edward Said and Daniel Barenboim assembled. How is it that musicians win our hearts leaping boundaries that our political and religious “leaders” are bent on reinforcing?

Zebunnisa Humayun Bangash and Haniya Aslam, as you’ve probably heard on NPR by now, are the Pakistani first cousins, ethnic Pashtuns, who went off to college in New England (Smith and Mount Holyoke) and got so homesick that they took to writing and recording songs to ease the pain of being stranded and broke in Western Massachusetts. Inadvertently they found themselves a network of passionate fans on the Web — first of mostly South Asian students all over North America, then of Pakistanis and Indians back home, then in the Gulf, and then in America and the online and record-buying universe.

They were drawing on a wide spectrum of live music they’d absorbed in their grandmother’s house: the songs of the Afghan diaspora through the 1980s, Persian and Pashto repertoires, ghazals in Urdu, pre-Partition movie music from Bombay, Sufi songs. And they were liberated by an enthusiastic performance culture that did not distinguish between high and low, or pop and serious music. Elvis Presley and the Beatles must have been Pakistanis at heart, they were so good. “Until I went to the States,” Haniya is saying, “I didn’t know what a ‘genre’ was.”

Suddenly it was said that Zeb and Haniya had invented a genre of their own, under the umbrella of “world music.” Call theirs “Urdu Blues,” or “Lahore Hip-Hop.” Part of the miracle here is that they could take so much, so fast from American rhythms, chords and forms and produce a song sound that is received back home as “authentic” fruit of Pakistani tradition. So what, I am asking, allows “fusion” to work so well in music, when it’s so hard to imitate in other public spaces?

Haniya: Sincerity. There’s sincerity in music. There’s very little ulterior motive. There’s just appreciation for everything: that you’re drawing everything in, you’re giving it back… There’s mutual respect. I don’t find any of these things in politics.

Zeb: Any cultural form has all of one’s values in it. All of that is latent within any kind of real cultural expression. And so I think when one can connect to each other’s cultures, one can actually connect to each other. For instance if you look at India and Pakistan, despite the fact that the two countries, you know, are daggers-drawn and then sometimes are trying to get together… [But] whatever the politics of the region might be, you cannot run away from the fact that you know anytime there is any musician that comes out in the Pakistani market, millions of Indians across the border will not only find out about them but will appreciate them, go out of the way to come onto their Facebook pages and appreciate them, and connect with them. Similarly, even in the worst of times: there’s a film that comes out in Bollywood and Pakistanis will be out in throngs buying that DVD. Whether it’s pirated, whether they have to go watch it in cinemas, they want to connect.

Haniya: I really do believe that culture and art and music specifically are the solution to the mess politics is creating. Where politics dehumanizes, art has the opposite effect. I think by virtue of being onstage, by doing what we do, even if we don’t address those questions that are on people’s minds, we can help bring a little bit of change. 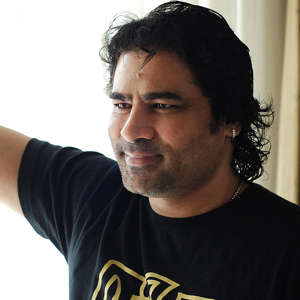 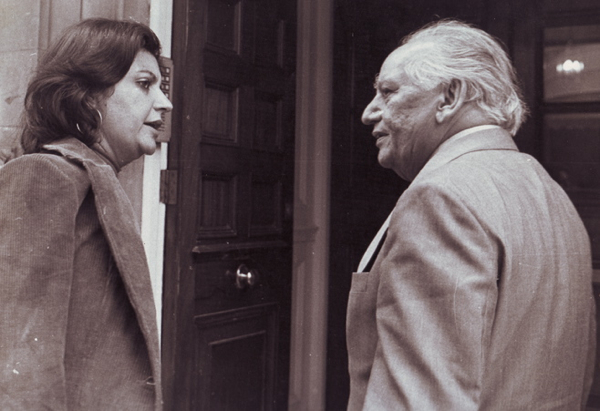 Click to listen to Chris’ conversation with Salima Hashmi (34 minutes, 17 mb mp3) Salima Hashmi with her father, the poet Faiz Ahmed Faiz Speak Speak, your lips are free. Speak, it is your...