A Postcard from Armenia

A Postcard from Armenia

While preparing Blogsday 2006, we found Christian Garbis, a Boston-born writer who blogs from Yerevan, Armenia, at Notes from Hairenik. To follow up on a post he titled As expected, no peace deal for Karabagh, we asked him to tell us more about life in Armenia:

Yerevan was a very European kind of city up until a couple of years ago, when many of the old districts, some with an over 100 year history, were being ripped apart to make way for new construction, with thousands of people displaced in the process. Some of those people were never registered as being the official residents of their homes for one reason or another and could not even prove that they were citizens since they did not have passports. Now many of these same people, some of whom are refugees from Baku, roam the streets looking for handouts, or are in a kind of shellshock. Most of the severely poor in fact live in Yerevan. 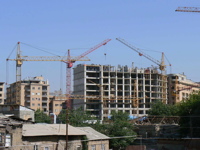 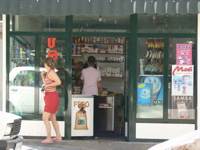 An estimated 40% of the population of Armenia is considered poor, although this number fluctuates depending on what report you read, whether official or released by international humanitarian organizations. Social programs are inadequate and under funded. … Although Armenia is considered the least corrupt country in the South Caucasus, taking 88th place with Georgia scoring 130 and Azerbaijan scoring 137 according to a report published by Transparency International in 2005, its ranking on TI’s list actually fell a few notches since 2004. The ruling elite or the “oligarchs??? as they’re often called can basically get away with whatever they want because citizens are too complacent to do anything about the corrupt business practices which are affecting their own lives, feeling powerless or unmotivated. Elections have traditionally been marred by fraud.

On the bright side Armenia is a fun place to live. The nature is spectacular, and the people are generally wonderful. I do feel very comfortable here, not only because I am ethnically Armenian but for the reasons that the quality of life is relatively simple, yet rich. Seeing poverty and economic stagnation in the more rural parts is not encouraging, but I see lots of potential here—the key is motivation, something people really need. Bureaucracy is everywhere—it’s sometimes hard to get anything done here administratively, which is why many pay a small bribe to expedite paperwork that needs to be filed or whatever, but it’s no big deal. I would argue that bureaucracy in Massachusetts is far worse!

Forgotten Even in Kampala

I wouldn’t go so far as to say that people in the South are indiffferent or unsympathetic to the crisis. But they are a bit ambivalent. It has no direct...