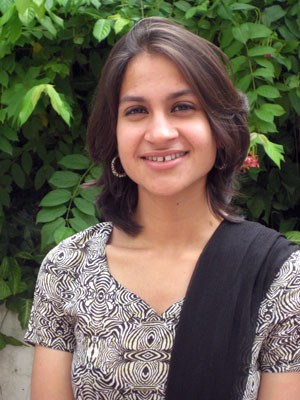 ISLAMABAD — Alia Amirali is a second-generation change agent in a society that’s stuck — or maybe worse: scared, confused, depressed, afraid it might be sinking. Her project, she begins, is to “rebuild the left” in Pakistan. She is giving us just a hint of a program, and finally a sort of plea to her alienated family and friends: go out and meet a real Pakistani for a change. As if to say: let’s find in each other the land of milk and honey that our parents remember before the mosque and the military seized the country 30 years ago.

Alia Amirali is the general secretary of the Student Federation in the Punjab. She’s also a daughter with a very different spin on creative dissent from her eminent father Pervez Hoodbhoy. Most usefully for me, Alia Amirali is short-listing the obstacles the rising generation sees between here and a society you’d want to live in.

(1) the Post-Colonial State. The machinery of statehood was built by the British to administer a colony. So the “state” in Pakistan is older than the 64-year-old “nation,” and still a bad fit with a patchwork of Sindhis, Punjabis, Balochis and many more language and faith minorities that might likely choose a looser federation of provinces if they had the choice.

(2) Islamism. Mohammed Ali Jinnah‘s founding dream was of a homeland for India’s Muslims that would also be a secular state and a pluralistic society, but he died scarcely a year after Pakistan’s birth, leaving a “conceptual orphan,” as it’s been called. “Being Muslim,” Alia Amirali is saying gently, “is not enough to keep us all together as a nation.”

(3) The assassination habit. The most exalted powers in Pakistan, like Benazir Bhutto, and the humblest Balochi separatists face the same grim equalizers: torture, disappearance and/or death. The rule of the Army and the “deep state” in Pakistan, as Alia Amirali puts it, is: “if they cannot control it, they will crush it,” and they will not be held accountable.

(4) The void. Since the military outster and execution of the charismatic populist President Zulfikar Ali Bhutto in 1979, Pakistani politics has been a mostly closed brokerage of favors and commercial deals — proof against debatable national “issues,” proof against fresh talent, too.

(5) The USA. “The American presence,” which feels like “occupation” to Alia Amirali, “is the biggest contributor to this chaos, this back-to-the-cave situation that Pakistan is in.” For 30 years the United States has been at war in, through or around Pakistan; we embraced and enabled the Islamist martial-law President Zia-ul-Haq through the 1980s. It is this American imperial record that lends legitimacy to the Taliban, in Alia Amirali’s view, and more than anything else separates Alia Amirali from her father. “He is hoping somehow that this very same character who created this monster will do away with it.”