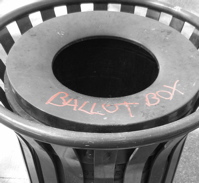 Last night we dissected the 2004 Ohio presidential election (what went wrong and why), and tonight we’ll use that same Ohio election as a kind of launching point both forwards and backward in time. Backwards to learn whether it and Florida in 2000 were particularly egregious failures — or whether they were basically business-as-usual in a two-party system that’s not eager for voting reform. And forwards to try to understand whether Ohio is any kind of indicator of our country’s electoral health.

Andrew Gumbel, U.S. correspondent for Britain’s Independent newspaper and author of Steal This Vote, will lead the charge — with an outsider’s perspective on how we, the self-proclaimed model of democracy, actually match up to our Founding Fathers’ ideals…and to the rest of the democratic world.

Also keep an eye out for Andrew Gumbel’s article in next week’s The Nation.

Of Hand Counts and Voting Machines

At this point, we cannot design a [fully verifiable electronic election system], nor can anyone else. Computer systems are so complicated, that there is no single person that understands...

Click to Listen to the Show (24 MB MP3) 4:50 Over 100,000 voters were possibly affected by [Secretary of State J. Kenneth Blackwell]’s ‘Paperweight Directive’… Approximately 93,000 spoiled ballots occurred in which...