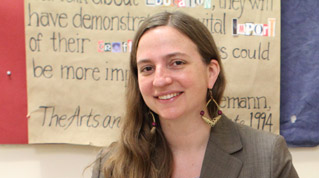 Click here to listen to Chris’ conversation with Anna West

Anna West, poet and teacher, is letting us in on “Louder than a Bomb.” Before it was an inspirational film, it was a high-school slam poetry festival she founded a decade ago with the Young Chicago Authors — a mentoring method that took off in the Second City and which she has now brought to the Harvard Ed School for some fine New England grooming, so to speak. She is on her way back now to her hometown, Baton Rouge, where she developed a WordPlay teen writing project. So she’s ready to demonstrate how lots of school districts can build platforms for budding writers — “garage poets.” That is, to build poetry into the performance repertoire of expressive teenagers.

Anna West is a favorite among the “stage” poets who have seized the initiative at the Massachusetts Poetry Festival on the weekend of May 13 and 14. The sound of her young poets here is closer to hip-hop than to Homer, you start to say, but then you wonder. It’s the sound of people first claiming their voices, the sound of selves crystallizing in words, declaring themselves. Not least: a lot of fresh responses here to the Whose Words These Are questions we started asking two years ago: Who’s writing poetry, in our midst, these days? And what is it trying to tell us?

We’re also drawing directly from hip-hop pop culture in big ways. I think that those of us who are outside the culture of hip-hop think of it in its commercialized form, which is actually something that has been co-opted, souped-up and sold back. Underneath that, there’s this entire fabric of participatory culture, which is really where it comes from, this idea that “Joey” around the corner has got crazy skills, and he’s a maker of culture, not simply a consumer of culture.

Anna West with Chris Lydon at the Grolier Poetry Book Store, Cambridge, May 2011.

Thanks to the Grolier Poetry Book Store in Harvard Square, Cambridge for studio space.