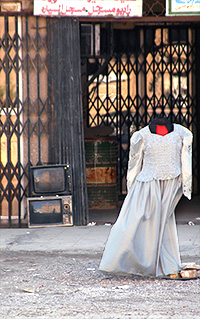 It’s only now, looking back on some of our shows from the last few months, that I can see an Iraq mini-series of sorts that should have been obvious for a while: smart talkers who, one at a time, have helped us understand what’s going on in the bewildering, occupied country thousands of miles away.

First was Kanan Makiya — the only Iraqi in the series, interestingly enough — who wouldn’t let us forget the horrors of Saddam’s regime and was still making a passionate case for the war as humanitarian intervention. Then came Juan Cole, the academic, historian, and blog aggregator extraodinaire. Last week was John Burns, the veteran war reporter with a breadth and vision that helped us glimpse, if only for an hour, the past, present, and possible (and terrifying) future of Iraq.

Now we welcome Anthony Shadid, the Pullitzer Prize-winning reporter for the Washington Post (and, before that, the Boston Globe). It’s his turn get us past the screaming headlines — the numbing numbers of new dead or the fitful constitutional process — and to focus our attention on the war and the country as he sees it. We’re turning to him for a lot, but taking our cue from his new book, which has at its beating heart a mosaic of human stories from Iraq: not generalizations, not caricatures, but real people.

Author of Night Draws Near

[In a studio in Oklahoma City, OK]

The death of the reporter Anthony Shadid in Syria — apparently of an acute asthma attack — is a tragic blow to our hope of grasping the Arab turmoil, also...