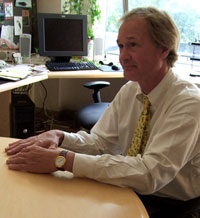 It’s a ban on all the Senators running except Barack Obama, an anti-war voice who hadn’t reached the Senate in 2002. The premise that Saddam Hussein, contained by arms inspectors and no-fly zones, was a threat beyond his borders “was so grossly hollow,” Chafee remembers from his own researches. “Even the Kuwaitis, who’d been invaded by Saddam, were telling us: don’t do it.” It’s Chafee’s guess that some unpredictable reckoning of responsibility for the war is still to come; that the striking feature of the early race for ’08 is the quiet unhappiness with the choices so far. “Americans would rather have a vigorous exchange,” he says. “We need a good tilt.”

But who is to demand the reckoning? And to pick up the pieces from the fractured front-runners?

I wouldn’t call Lincoln Chafee child-like, but he does have the penetrating eye of the innocent kid who sees through magicians’ tricks — who speaks up about what emperors are...

Lincoln Chafee is a soft-spoken patrician with fire in his heart. Lincoln Chafee at Watson His corridor chatter at the Watson Institute at Brown University (where we’re both visiting fellows)...