Coltan in the Congo

Coltan in the Congo

Blaine Harden’s remarkable article The Dirt in the New Machine starts with this memorable line:

Before you make another call on that cell phone, take a moment, close your eyes and reflect on all you’ve done for Mama Doudou, queen of the rain-forest whores.

Blaine Harden, The Dirt in the New Machine, The New York Times Magazine, 8/12/01 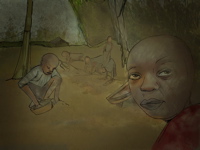 Still from an animation about coltan mining and video games. [Norma V. Toraya]

The piece is about how mining for the mineral coltan, which is used to make components found in cell phones, laptops, and video game consoles, has transformed the Congo. Harden calls it “a squalid encounter between the global high-tech economy and one of the world’s most thoroughly ruined countries.” Things are so bad, Harden says, that even though coltan mining has disastrous social and environmental consequences, people in the Congo have calculated that the only thing worse than mining coltan would be not mining it.

Turns out that John le Carre‘s new novel, The Mission Song, also deals with coltan mining and its impact on the Congo. According to a review in The Independent, “the connection between Western consumption and African death lies at the heart of this novel.”

Back in July we started talking about the DRC, trying to figure out how we might be able to cover the complexity of that country. This seems like it might be a good way to get into that conversation. So as this show warms up, we’ll be looking into mining and its implications, and at the Congo at large. More soon.

So I’ve done a little digging on this story and here’s what I’ve come up with so far.

There was a lot written about this story in 2001. It seems to be when the story broke and had the most traction. In addition to Blaine Harden’s piece, there was this excellent piece by Kristi Essick in the Industry Standard tracking the coltan supply chain from the Congo through the various distributors up to the multinational corporations like Intel that use it for consumer products, and this piece on NPR.

After realizing this story might be four years old and over, speaking with Blaine Harden, and reading this comment from the always insightful Ethan Zuckerman, I’m left with some doubts about this show. I’m doubtful a) that the coltan angle is the best way to approach a show about the Congo, and b) that the coltan story is a show in and of itself.

I’m going to take Ethan’s suggestion (and nother’s poetic reminder) and reconsider this show. Hopefully to make it about either the pilfering/colonialism of other resources, or more generally about the DRC. Thoughts?

I have been taught by a professor to enter a cell in a special way. We hope to see a virus putting out the RNA in a cell, telling the...

From super-intern Rob Kier: Analysis of the machine, in light of real election procedures, shows that it is vulnerable to extremely serious attacks. Edward W. Felten, Security Analysis of the Diebold...