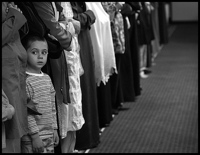 More than half of the 250 million Muslims in the Arab world today are younger than 25. The conventional wisdom is that the generation now in its 20s and 30s is more religious, less US-focused or -friendly, and more radicalized than the generation currently in its 50s and 60s.

We’re sketching out generational shifts in the Middle East and the larger Muslim world in the last twenty years or so. It’s a huge topic, obviously, but we’re trying to narrow it down by focusing on a few areas: approaches to — or conceptions of — the west; religious vs. secular impulses; and political currents and action.

We’re inviting a cast of inter-generational Muslim minds to our round table. Obviously, this show can’t exist in a vacuum, and we won’t ignore the worsening situation in Lebanon and Israel. Our hope for this particular hour of Open Source, though, would be to ask not “What do you think about what’s going on between Lebanon and Israel?” but rather, “Do you approach Israel and Lebanon differently than your parents (or children) do?”

Click to Listen to the Show (24 MB MP3) Israel occupied Southern Lebanon for 18 years, it was Israel’s Vietnam… It is commonly regarded as a huge mistake, and it’s still...