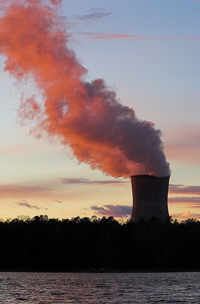 This is what Iran wants. Will they get it? [Brian Vetter / Flickr]

Iran wants to go nuclear. They want to develop nuclear energy capabilities, and after that, maybe, a bomb. No one knows how close they are, or how long it might take them to get there, but they’re building on a program developed and strengthened under the Shah, and according to our friend Vali Nasr, their goal is to be “one screw driver short of the bomb.”

The E.U. is trying to talk them down. China and Russia are telling them to cooperate, too. And tomorrow the IAEA, the UN’s nuclear watchdog, will hold a special meeting to decide whether to recommend Iran to the Security Council. Which could lead to sanctions.

President Bush used last night’s State of the Union Address, the same speech in which he coined the phrase “Axis of Evil” in 2002, to speak directly to Iran:

Iran [is] a nation now held hostage by a small clerical elite that is isolating and repressing its people…The Iranian government is defying the world with its nuclear ambitions, and the nations of the world must not permit the Iranian regime to gain nuclear weapons. America will continue to rally the world to confront these threats.

The response from Iran was not kind:

I am telling those fake superpowers that the Iranian nation became independent 27 years ago and… on the nuclear case it will resist until fully achieving its rights…Our nation cannot step back because of the bullying policies of some countries in the world.

President Mahmoud Ahmadinejad, in a speech on state tv, 2/1/06

So now what? As one senior British official once put it, “Everyone wants to go to Baghdad. Real men want to go to Tehran.” So is this the last chance for the Bush doctrine of pre-emption, or the place where preemption dies? Or, is peaceful cooperation between Tehran and the West actually a possibility? Is Ahmadinejad – who has called for the destruction of Israel more than once and who is drumming up nationalist sentiment at home – acting on behalf of national sentiment, or is he a wildcard?

And if Iran does go nuclear, what happens then?

Author of All the Shah’s Men.

Former Director for Nonproliferation and Export Controls at the National Security Council.