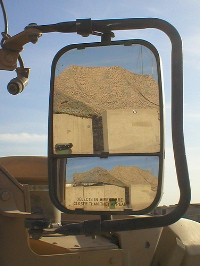 After the Iraq Study Group’s recommendations (and Rumsfeld was ousted and President Bush “agreed that the timing is right for new leadership at the Pentagon”), before the Pentagon and NSC finalize their own reports, and on the day when President Bush is set to convene his own panel of commanders in Iraq, we’re wondering what former and current members of the officer corps have to say about how we got here. Think of it as a sort of ad-hoc military inquest.

We’d like to tackle the famous “way forward” as its own hour, but the heart of this inquest is a deceptively simple question: How do members of the officer corps explain what went wrong? The questions fan out from there: Does the major fault lie with the civilian military leadership or the offices of the Joint Chiefs? Is this a problem of conception or execution? What are the major “lessons learned?”

And a question for Open Source‘s civilian and military commenters: How would you teach the Iraq War to West Point cadets in twenty years?

Author, The New American Militarism: How Americans Are Seduced by War

The Classroom Lessons of Iraq

Click to Listen to the Show (24 MB MP3) In twenty years the Iraq war — like the Napoleonic and Peloponnesian Wars before it — will be taught in classrooms at...