Pakistan is different, as you remember. Usually, we speak of a country having an army. In Pakistan, it is said, the army has a country. Washington’s friend, the General and President Pervez Musharraf, has embodied the off-and-on tradition of army rule in Pakistan since his bloodless coup in 1999. George W. Bush, coming into his 2000 presidential campaign, was asked by a reporter to name the leader of Pakistan, and found he couldn’t. But then he added memorably: “The new Pakistani general, he’s just been elected — not elected, this guy took over office. It appears this guy is going to bring stability to the country, and I think that’s good news for the subcontinent.” 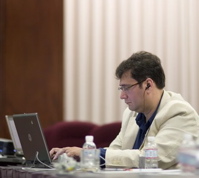 The last 8 years have been a time of growth and much prosperity for many in Pakistan, not least because of the US investment in Musharraf as nominal point man in the “war on terror” next door in Afghanistan. But through Pakistan’s 60th birthday year, 2007, between judges and jihadists, Musharraf has found himself and his regime and more and more ominous trouble. See Juan Cole‘s recent review in Salon. In opinion polls of all Pakistan, it is reported that Osama bin Laden is now more popular than Musharraf. Musharraf’s wrangle with judges and the legal profession is about the rule of law itself. The fight began over Musharraf’s suspension of the Supreme Court chief justice in March and it has exploded in the past month around Musharraf’s imposition of martial law — to contain the terrorist threat, he says. In July, meantime, Musharraf’s paramilitary Rangers had laid siege to the Red Mosque and madrassa militants on government land in the heart of Islamabad, and in a brutal shootout on July 10 that outraged the Taliban and the Islamist “tribal areas,” killed at least 100 people. Then came the (Harvard educated) former prime minister Benazir Bhutto back from exile, a return that was supposed to soften Musharraf in some sort of power sharing, but that provoked a savage bomb attack. And now comes the onetime prime minister whom Musharraf deposed in 1999, Nawaz Sharif — not to share anything. “We want democracy and nothing else,” he declared yesterday in Lahore, the capital of Pakistan’s Punjab province. “I am here to make my own efforts to rid the country of dictatorship.”

Our conversation today begins a sort of Pakistan for Beginners. Our guest Sabahat Ashraf is a technical writer in Silicon Valley. He’s a prolific blogger, and perhaps a key to the global chatter and global stakes in the homeland of a universal diaspora. Please join the conversation with a comment and point us to your favorite voices of wisdom on the past and future of Pakistan, in and out of the country.

Irfan Husain, a columnist with Dawn newspaper in Pakistan, whose commentary is accessible on the openDemocracy site. See recently: Pakistan: A Question of Legitimacy. Also: Pakistan’s Multi-Faceted Crisis. And: Pervez Musharraf’s Desperate Gamble

Also at openDemocracy, a “troublesome lawyer” in Pakistan, a writer with a Harvard education, Salman Raja.

Doctor Awab Alvi, a dentist in Karachi, whose blog is Teeth Maestro.

Arif Rafiq, who edits The Pakistan Policy Blog. He is a policy and communications consultant, based in New York, and the author of the forthcoming independent report, “Pakistan: The Way Forward.”

Omer Alvie, a Pakistani living in the UAE who writes on global matters at The Olive Ream and on all things Pakistani at The Pakistani Spectator.

Wikipedia in all its Wiki ups and downs, has a pithy explanation of some good background basics on Pakistan.