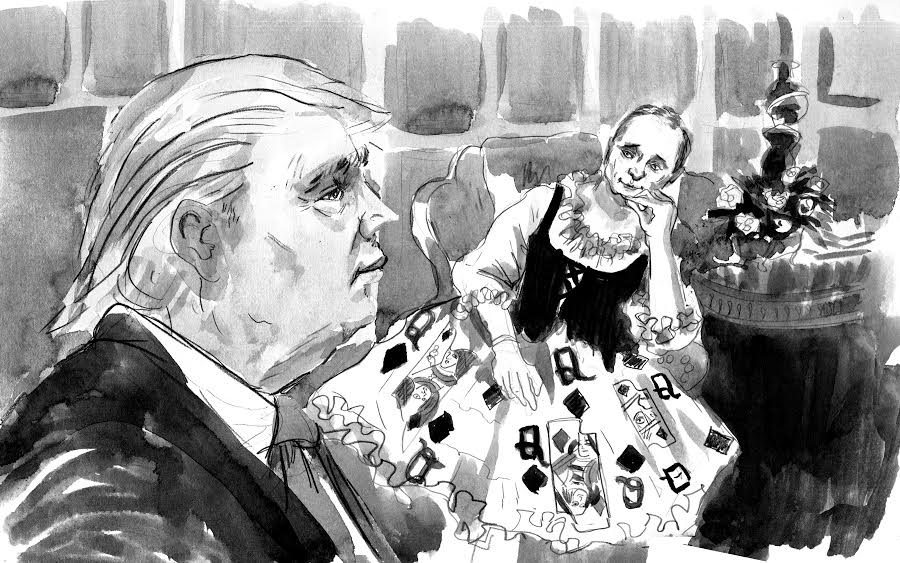 Calling on the spies we know best – all of them fictional – to explain the Helsinki summit: If it was spy-craft in plain sight, what would James Bond or Jason Bourne have seen that we didn’t?  What would George Smiley have been observing – Britain’s shabby, morose Number Two spy in the Cold War novels of the great John LeCarré? The line is out there in a hostile press that Trump and Putin in Helsinki wasn’t a chiefs-of-state summit so much as a huddle in broad daylight of a Russian-intelligence asset and his KGB handler. Outrageous if even remotely true. Without evidence, it’s just political rage talking. But what would those spies, and their authors, know drawing on their experience and their imaginations?

The Manchurian Candidate movie script is where the Donald Trump story has been trending for almost two years now: the wild notion in the Hollywood classic from 1962 that US presidential politics could be taken hostage by a brainwashed pawn of Russian spymasters. In the movie, Lawrence Harvey played the shell of a man, Raymond Shaw, who at the sight of a playing card, a Queen of Hearts, will do anything he’s told. Frank Sinatra played his pal from Army days who trying to snap Raymond back to sanity.

From the novelist Richard Condon and screenwriter George Axelrod, The Manchurian Candidate was thriller fiction, obviously. The suspicion after the Helsinki summit – that a “treasonous” Donald Trump is the witting or unwitting stooge of Vladimir Putin – is something else: a reading of circumstances, paranoid politics, perhaps.  But fiction has its own claim on authority: it’s the lie that tells the truth, people have said; it’s the work of art and intuition, and the imagination that gets to the point ahead of the plodding facts.

Robert Baer was a CIA field operative in the 1980s and 1990s, mostly in the Middle East. George Clooney played the rough and tumble Robert Baer role in the hit movie Syriana in 2005, from Baer’s first book: See No Evil — all about the evil underside of oil and arms trafficking, dynasties at risk and drone assassinations in something like the Iraq war.  He made fiction out of facts, Robert Baer, a storyline out of chaos in the news. The premise is that it takes the mind of fiction, a make-it-up imagination, to see what was going on at the Helsinki so-called summit. Richard Lourie is a Boston-born Russianologist who had the nerve and verve to compose the late dictator Josef Stalin’s autobiography.

Our guest David Filipov came home this year from a long stint as Moscow bureau chief of the Washington Post.  He edits the News at Northeastern University.

Olen Steinhauer joins us from New York.  He’s a rising star in Spy Fi, author of five novels set in Ukraine, decade by decade since the 1940s.  The third season of his video series Berlin Station begins this fall on EPIX cable.

Who’s going to explain how it is we trust the best fiction on this stuff more than we trust the so-called intelligence?

All The Old Knives
Olen Steinhauer