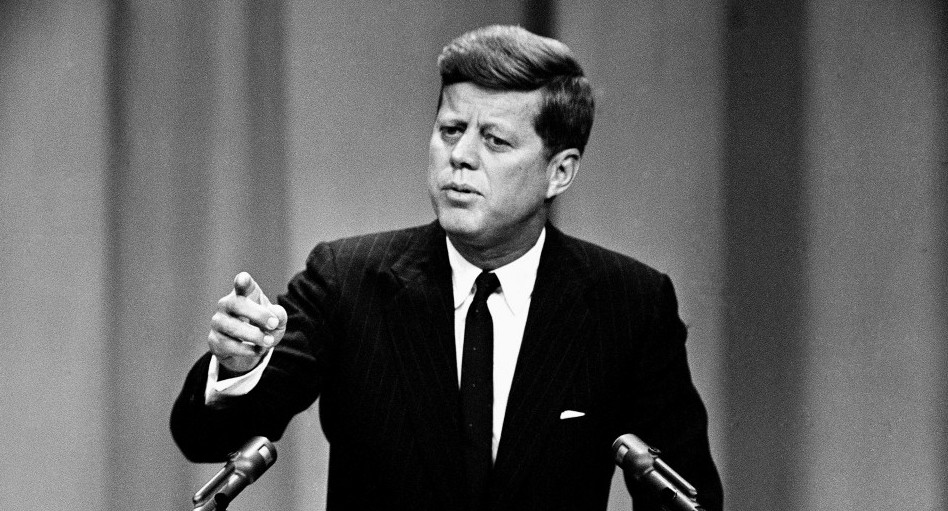 Find a way to see Virtual JFK — a documentary film chasing a what-if riddle — and have your own presidential debate before choosing between John McCain and Barack Obama.

The question in Virtual JFK is whether President Kennedy, had he lived, would have withdrawn from war in Vietnam in 1965. It is at least arguable that what hangs on the answer is nothing less than the fighting (mostly losing) “counter-insurgency” doctrine that has fired up American foreign policy for nearly half a century, and that accounts for the “permanent war” dread through the Bush years and beyond.

Presidents matter, and presidential temperament is decisive: these are the fundamental premises of the film, and the moral for voters this year. Koji Masutani, 27, made Virtual JFK with his Brown University professor of history and international relations, James Blight. Together they have chosen six “crises” from the early Sixties in which restraint prevailed: the Bay of Pigs fiasco in which Kennedy blocked US Marines from saving the misbegotten mission; the flare-up and ceasefire in Laos in Spring, 1961; the Berlin crisis over the Soviets’ wall in August, 1961, when JFK pulled US tanks out of sight; Kennedy’s early rejection in 1961 of his generals’ plea (including his favorite, Max Taylor) for military intervention in Vietnam; the Cuban missile crisis of 1962, talked down by a “cautious, skeptical” president; and the secret staff planning in October, 1963 to start drawing down the American advisers in Vietnam.

It is clear to Jim Blight, anyway, that JFK’s instinct and persistent pattern were to avoid the war option, to say “no” to his generals, to engage his own restless, combative mind in peaceful, face-saving alternatives. Kennedy was a multilateralist, a man with a delicately balanced reading of an interconnected world. He did not hesitate to speak of his and our responsibility to “mankind” and “the human race.” He would have welcomed “the global test” of American policies. He spoke of “adversaries,” not “enemies.” He dealt with interests, not “evil.” He said: “I hope I am a responsible president. That is my intention.” What the contrarian viewer sees as well is that JFK was up to his neck, at least, in Cold War reflexes. Those wacko nuclear bomb shelters were “useful… important,” he says in a press conference. Kennedy bought the domino doctrine that the fate of Southeast Asia was all or nothing, and he sold the silly simplistic line that nasty “guerrilas” were disrupting a peaceful democracy in South Vietnam. In his lesser moments Kennedy can sound shockingly close to George W. Bush, needling up fear and hostility around catch-phrases like “the most dangerous time in the history of the human race.” But then, what if it really was?

The seductive beauty of Virtual JFK is watching the play of doubt and responsibility, learning and wit on the weathered face of a 45-year-old war hero who is, unbelievably, the president of the United States.

KM: Imagine sitting in an editing studio in the dark for three years, hours and hours a day, having grown up with parents who are not American… I am listening to Kennedy, a president who is articulate, essentially disarming. I found this very surprising, as if he was an alien. I am just surprised that we have been here before: muddled in a war that can’t fully be explained. In the second part, we get in to Lyndon Johnson, someone who uses the kind of rhetoric that George Bush uses today, in absolutes.

JB:It’s so interesting because Johnson’s tapes are phone tapes and it feels like you’re sitting right there with the man himself. For the first three or four months, the phone tapes with McNamara show that McNamara, in a sense unconsciously still thinks he’s talking to Kennedy because he keeps interrupting him, and that is not something that is done with Johnson. He also keeps bringing data to bear on the situation, and Johnson doesn’t want to hear that either… until about March when…we did a rough calculation: about 50% of McNamara’s interventions after that are “yes, sir.” There is no known instance of a conversation with Kennedy that we have on tape where Kennedy talks and McNamara says “yes, sir.” It’s McNamara talks and Kennedy asks questions and then thinks about it…

KM:Kennedy required competitive information. At every meeting Kennedy wanted to hear from people who disagreed with him, and then under Johnson there was evidence that he wanted a consensus to take place before the meeting occurred…

Koji Masutani conceived his movie before the shape of the 2008 race was remotely clear. The movie never mentions Barack Obama, but one feels that Obama has been growing into the Kennedy role. Ted Sorensen, who wrote many of Kennedy’s best lines, isn’t mentioned in the movie either. But Sorensen figures largely in our conversation here: So [we asked] Ted [Sorensen, Kennedy’s former speechwriter] what is it about Barack Obama that reminds you of your former friend and boss. He said, “it’s this: his first reaction will be to think, to consider. It will not be to strike out to strike out at the first opportunity, it seems to Ted, and it seems to me, frankly. That doesn’t make him a ditherer, not a person who is incapable of making a decision, but a person who wants to hear as many points of view as are relevant to the situation as possible and then to move forward and to try to do the least harm. Not an ideologue, not going to try to democratize the world and the moon and Mars and everything with it.” The point of leadership, he said, according to Kennedy, was to do as little harm as possible. And he thinks that Obama has kind of internalized that.

James Blight of the Watson Institute at Brown University and Virtual JFK in conversation with Chris Lydon, September 29, 2008