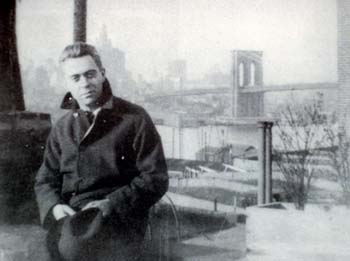 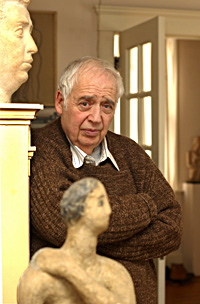 The great sage of New Haven is walking us through the dark, dense maze of his first and favorite poet, Hart Crane (1899 – 1932).

Take this as a sort of companion piece to go with Helen Vendler’s reflections on her own “closest poet,” Wallace Stevens.

There’s a preview, too, of Harold Bloom’s next big book, coming in Spring, 2010, just before his 80th birthday. Living Labyrinth: Literature and Influence will reconsider his famous grand argument in The Anxiety of Influence (1973) about poets and their precursors.

But the joy of this conversation for me is the generous, melting demonstration of Bloom’s theory and his method — tracing (with never a glance at text or note) the spidery links from Crane’s words and images back to Melville, Yeats, Milton, Spenser, Walter Pater, and The Song of Songs in the Hebrew Bible; with real-life anecdotes thrown in touching Hart Crane’s friend the photographer Walker Evans, and his devotee the playwright Tennessee Williams. By the end of Harold Bloom’s living-room performance, one of Hart Crane’s most famous pieces, “The Broken Tower” makes a kind of music — madly, deeply in tune with Bud Powell’s “Un Poco Loco.” Listen for Professor Bloom’s laughing indulgence when I tell him that, of course, Harold, the living labyrinth is you! “A nice trope, my boy.” 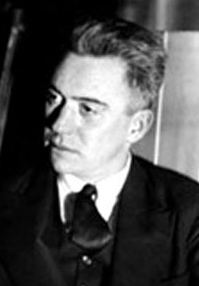 Here, for before and after readings, is what Bloom calls Crane’s “death poem”:

The bell-rope that gathers God at dawn

Dispatches me as though I dropped down the knell

Of a spent day – to wander the cathedral lawn

From pit to crucifix, feet chill on steps from hell.

Of shadows in the tower, whose shoulders sway

The stars are caught and hived in the sun’s ray?

The bells, I say, the bells break down their tower;

And swing I know not where. Their tongues engrave

Membrane through marrow, my long-scattered score

Of broken intervals… And I, their sexton slave!

And so it was I entered the broken world

To trace the visionary company of love, its voice

An instant in the wind (I know not whither hurled)

But not for long to hold each desperate choice.

My word I poured. But was it cognate, scored

Of that tribunal monarch of the air

In wounds pledges once to hope – cleft to despair?

The steep encroachments of my blood left me

No answer (could blood hold such a lofty tower

As flings the question true?) -or is it she

And through whose pulse I hear, counting the strokes

My veins recall and add, revived and sure

The angelus of wars my chest evokes:

What I hold healed, original now, and pure…

And builds, within, a tower that is not stone

(Not stone can jacket heaven) – but slip

In azure circles, widening as they dip

The matrix of the heart, lift down the eyes

That shrines the quiet lake and swells a tower…

The commodious, tall decorum of that sky

Unseals her earth, and lifts love in its shower.

Not the least of Harold Bloom’s many charms for me is that he bridges poetry and jazz, to which our conversation turns. Bloom combines ardent fan-hood and that incomparable gift... 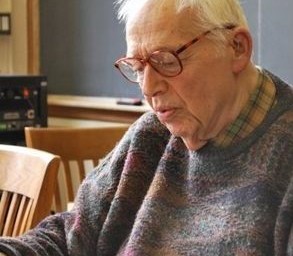 Harold Bloom, in conversation about his famous Anxiety of Influence, slips so comfortably into baseball and jazz metaphors (“tropes,” in the lingo) that I’m wondering if it’s time for the...