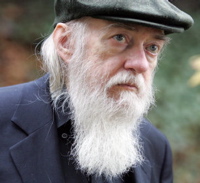 Keith Waldrop, who just won the National Book Award in poetry for his Transcendental Studies, is a quilter in phrases. He eschews any intention or meaning that you could point to in his work. He makes statements here and there, but his poetry, he’s said, is about “having nothing to say and saying it.”

“The sound is what I go by,” he says. “I write for the sound and tone of things.” At the same time he communicates, as the poet Michael Palmer has written, “a particular humanity and an appreciation for the absurd, even the grotesque, in daily life.”

We’re laughing out loud a lot in this conversation. And I feel I’m cracking “one of the vital and requisite, semi-secret presences in American letters,” quoting Michael Palmer again. Waldrop is remembering his boyhood in Emporia, Kansas, where grew up in the Bob Dole era, nourished by comic books and the Bible. No one in his family had much interest in reading, much less writing. “Nobody told me I could be a poet,” he says. Poetry was “something I was sneaking into.” 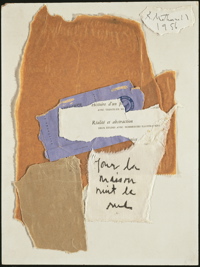 Keith Waldrop’s poems could remind you of Samuel Beckett’s stark minimalism in language and feeling, or of Thelonious Monk’s beautifully bent phrasing and harmony in music. He’s even closer, as he says, to the gorgeous torn-paper collages of the painter Robert Motherwell.

He came to his “collage poems” decades ago, in admiration of Motherwell and in some frustration that his teaching load at Brown University was crowding out “my own work.” So every night at midnight sharp, he began experimenting with a new process:

I brought up a batch of books, all prose books, and no verse, no poetry. I stacked them on the dining room table. To write a poem I would take three of the books, of three different kinds: I would have one novel, usually a book of psychology or science or something, and then some third depending on what was around. I would start opening them and getting phrases out, sort of at random… My eyes might go down and light on a phrase, and I would put it in. I didn’t spend a great deal of time doing it. I would put these phrases down, going from one book to another, and would make one stanza, let’s say of four lines or so. Then I would do it again, and get another stanza of four lines, and when I had enough that I thought I’m tired of doing this… (it might be a page, it might be a couple of pages, not more than two or three) I would take it upstairs to type, and I would retype these stanzas in alphabetical order… and eventually, in a month or so, I had a book of poems. I arranged them alphabetically by title. You’ll understand also, in retyping them and then reading over them — If I didn’t like a line or a word I could throw it out, I could change it, I could add something…It wasn’t that I was trying to figure out something about collage. I was trying to find poems.

And eventually I had this book.

Keith Waldrop with Chris Lydon at the Watson Institute, 12.10.09.