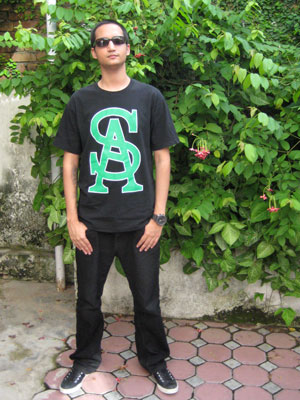 I-S-L-A-M-A-B-A-D, baby.
Let’s play Wii: Crash into each other till we have to sleep. There’s no other place I’d rather be…

I-S-L-A-M-A-B-A-D, baby.
Get caught up in this motha fuckin cycle of life,
And we’re all just having fun…

ISLAMABAD — Adil Omar — referring to himself here as “Paki Rambo” — is working the entertainment value of social and personal anger, as rappers do. The twist that surprised me in conversation with Islamabad’s 20-year-old hip-hop star is that he also sees himself offering the world a light and cool side of Pakistan that the West doesn’t know. “I mean as soon as you hear Pakistan, all you think about is target killings and bombings and heroin and acid burning, and … It’s just really ugly. And that is a reality as well, but there are a lot of levelheaded, rational people who live here as well and I’d just like to represent those people.”

Adil Omar is a child of the Pakistani elite in an unhappy outpost of American empire; and he’s a player in a global entertainment world that the Internet has created. It’s a mix of roles that puts him closer to the beats of the South Bronx and the recording industry in Los Angeles than he is to the hometown neighbors. Pakistan, as he says, is just a fraction of his fan base, which runs from the States to Europe to South Africa to Japan. But he’s telling us a lot about the tensions that many Pakistanis live with.

AO: There are certain things you can’t say in this country… I mean, if I said certain things I’d probably get killed. The fact that there’s no freedom of thought and freedom of speech in this country is offensive to me. You can’t talk about political systems. You can’t talk about religion. I mean it’s not open to discussion at all, it’s just too dangerous. I wish I did have the balls to put myself at risk but I don’t. I would like to live longer.

CL: People don’t seem to hesitate to say they live in a dysfunctional state. That’s a kind of freedom. Sometimes it seems like a chirping, cheerful little prison colony you’ve got here… but it is chirping.

AO: I mean it depends… Obviously if you know what’s going on you have to admit that this is a really dysfunctional place. But sadly a lot of people are either apathetic or in complete denial about their surroundings. It’s just that peoples’ priorities are completely messed up. I mean I have a friend for example who’s a totally normal rational guy and with pride he was saying ‘You know Pakistan’s the second fastest growing nuclear nation in the world, isn’t that amazing?’ and I was, like, no that’s not amazing. I mean we don’t have any money for education and healthcare; why is that amazing? And he was saying it with pride, so I mean it’s just people love the idea that we’re some big bad fighting nation with awesome weapons and awesome this and awesome that. You know? I think it’s absurd. It’s like an ego thing. I think people have their priorities wrong. 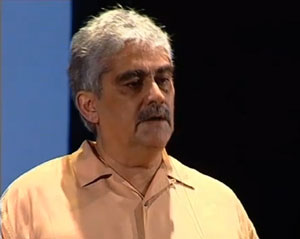