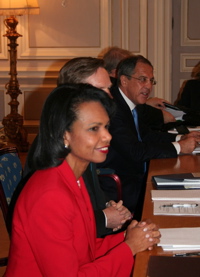 Dick Cheney’s fantasy war with Iran (“Real men want to go to Tehran,” was the line three years ago) has been postponed, maybe shelved. Condi Rice has taken charge with her readiness to engage Iran with European cover on the matter of nuclear development. A change in the Washington weather is palpable. Reality-based thinking, Congress and foreign allies are all being re-engaged. Diplomacy is being rediscovered. “When Henry Kissinger, Madeline Albright, Chuck Hagel and Richard Lugar all say: ‘you have to talk to Iran,’ well, you have to talk to Iran,” said Joe Cirincione, our non-proliferation coach at the Center for American Progress, in a phone conversation on the news. “It’s about time,” Cirincione said.

The rest is a mystery, starting with Iran’s readiness to suspend uranium enrichment and to accept a cluttered invitation. Blogger Laura Rozen of War and Piece says, “Not even the American diplomats who secretly hatched the announcement can guess the ultimate reaction from Iran,” and her best sources sound doubtful:

“I don’t think the Iranians are going to accept this,??? says Kenneth Katzman, an Iran expert at the Congressional Research Service. “ The U.S. didn’t offer any concrete concessions. All the U.S. said is we would come to the table. We didn’t say what we would do at the table. There’s not enough in it for Iran.???

Former Iranian deputy foreign minister Abbas Maleki, currently a fellow at Harvard University’s Belfer Center for Science and International Security, expressed dismay that Rice’s offer to join nuclear talks also included comments about alleged Iranian support for Hezbollah in Lebanon and Iranian interference in Iraq. “If she [Rice] had explicitly referred only to the nuclear issue, than maybe Iran should agree to talk,” he said in an interview in Washington Thursday. “But she combined it with Lebanon, Iraq, terrorism,” he added, saying those issues impinge on Iran’s sovereignty.

In Washington as well the Bush team’s intentions are veiled, and Condi Rice’s running-room is not certain. Robert Blackwill’s commentary in the Wall Street Journal, coming from a key neo-con on the NSC staff in Bush’s first term, could be taken as Cheney growling that a war on Iran would be bad but a nuclear Iran would be worse:

The use of American military force against Iran’s nuclear infrastructure would obviously carry great risk. But acquiescing in an Iranian nuclear weapons capability would be deeply dangerous for the U.S. and likeminded democracies for decades to come. It would be regarded by the entire world, friend and foe alike, as a strategic defeat for the U.S., and produce a major shift toward Iran in the balance of power in the Greater Middle East.

It may well take the summer to figure the shape of the table, and the set of the jaw-jaws at it. So let’s get started.

Author of All the Shah’s Men.

Professor of political science, University of Hawai’i at Manoa

Click to Listen to the Show (24 MB MP3) [PhotoLuna 25 / Flickr] Seymour Hersh got most of this war’s scoops, and now he says there’s talk of — active planning and...

Click to Listen to the Show (24 MB MP3) This is what Iran wants. Will they get it? [Brian Vetter / Flickr] [Booked for Wednesday February 1] Iran wants to go nuclear. They...