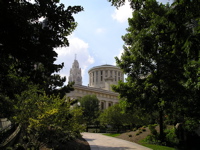 Ohio’s 15th congressional district presents one of the top opportunities for Democrats this year. The Columbus-area electorate is thinking about sending its long-term and influential Representative to the sidelines, and filling her position with a relative rookie. With a month to go, polls show first-term county commissioner Mary Jo Kilroy in an even heat with seven-term incumbent Deborah Pryce. If Pryce gets the boot it may not be because she played the game poorly but because she’s on the wrong team.

Republican Pryce, Chair of the Congressional Republican Conference, has been a shoo-in since she took office in 1993; in 2004 she garnered more than 60% of the vote. But now she’s fighting for her political life as Ney’s high crimes, Foley’s indiscretions and Bush’s plummeting approval ratings have turned her Grand Old Party into the elephant in the room. Even the Taft name, once a 24-karat commodity in Ohio, has turned to dross. Pryce is now billing herself as “an independent voice” in an effort to unhitch her wagon from the GOP star before she crashes and burns.

The 15th congressional district may have caught our eye, but it’s a stand-in for the Buckeye State. For generations a Republican stronghold, Ohio has been under single-party control for 16 years, and in 2004 it nailed the lid on Kerry’s presidential coffin. But this year democrats are making inroads in several districts.

What’s happening to a state where putting an “R” next to your name once guaranteed a win? Is a floundering GOP unique to 2006 or does this mark the end of a three-century-old tradition? Are stronger democratic candidates emerging or are they just lucking out?

David Rogers, Ohio House Race Is Brutal Test, The Wall Street Journal, August 31, 2006: “This district doesn’t offer a homogenous landscape, but rather is home to African refugees, a growing Latino community, university students and urban gays, all thrown together with corporate Columbus, upscale suburbs and century-old farmhouses, including one in London where President McKinley once spoke from the front porch.”

James Nash, Battle for Pryce’s seat heats up over link to Foley, The Columbus Dispatch, October 7, 2006: “The race for a central Ohio congressional seat, once fought mainly by surrogates, descended into furious hand-to-hand combat yesterday as challenger Mary Jo Kilroy took to the airwaves to accuse Rep. Deborah Pryce of coddling a former Republican congressman accused of exploiting male pages.”

Dan Horn, Ohio GOP ‘tired out’, The Cincinnati Enquirer, October 8, 2006: “The president was quoted in Bob Woodward’s new book as calling GOP gubernatorial candidate Ken Blackwell “a nut.” And a new poll showed [Ohio] voters trusted Democrats more than Republicans, not just on the usual stuff – education and the environment – but even taxes.”

Jim VandeHei and Chris Cilizza, GOP Scandals Dog Ohio Candidate, The Washington Post, September 27, 2006: “Gov. Bob Taft? He was convicted of illegally accepting gifts. GOP gubernatorial candidate Ken Blackwell? He is getting trounced in the polls. Bob Ney, the current congressman? He admitted taking bribes and then checked himself in for alcohol rehabilitation.”

Ari Berman, The Ney Scandal Grows, The Nation, December 15, 2006: “It was the first of many favors Ney would perform on Scanlon’s and Abramoff’s behalf.”

Arizona’s 8th Congressional District stretches north from the border to a bit of the southern Tucson suburbs, but a Democrat up in Tucson doesn’t necessarily want the same things as...