Pennsylvania is Philadelphia and Pittsburgh with Alabama in between.

James Carville, quoted in A Democrat for Main Street, The Washington Post, August 16, 2006 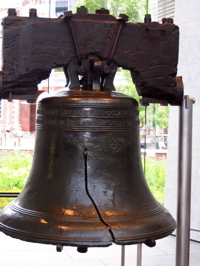 For Whom Will the Liberty Bell Toll? [Tim Wilson / Flickr]

The Alabama part of James Carville’s Pennsylvania is traditionally the Republican stronghold, but this year it appears to be going with the Democrats for the first time in decades. And the suburbs, which are usually up for grabs, are swinging to the left and joining the cities, which have long been a Democratic mainstay.

Bob Casey, Jr., son of a late and beloved Pennsylvania governor, is expected to unseat Rick Santorum, the GOP’s third-ranking Senator. If Casey wins he’ll be the third Senator to unseat a Republican in 60 years. Casey is pro life and anti gun-control; he’s also not Santorum.

In 1994 Rick Santorum was at the right place at the right time. The traditionally conservative Quaker state elected Santorum on the heels of Newt Gingrich’s Contract with America. In the decade that followed, Santorum achieved Christian rockstar status. Now his anti-gay, pro-intelligent-design, war-hawking ways have eroded his support down to his base; polls show him with 41% of the vote.

Would a Casey victory signal the beginning of the end for the religious right? Would it give the Republicans a reason to strike back even stronger in 2008? Or is this race just a blue blip in a traditionally purple state?

David Brooks, A recent look at Santorum, New York Times (Select), October 29, 2006: “After Election Day, the underprivileged will probably have lost one of their least cuddly but most effective champions.”

John Baer, What it means to lose in PA, The Philadelphia Inquirer, October 19th, 2006: “Santorum, after running an aggressive, smart campaign, after beating Casey on points and substance in four debates, after desperately fighting for a job he loves, is going to lose. And Casey’s going to win a job he never wanted in a city where he doesn’t want to be and in a way in which few will give him credit.”

Amy McConnell Schaarsmith, Penn Hills loses bid to charge Santorum for online school tuition, Pittsbrgh Post-Gazette, July 12th, 2005: “Estimates of the tuition paid by Penn Hills range from $34,000, which Santorum claims was paid to the cyber charter school, to $67,000, which some school board members say the district paid.”

Lowman S. Henry, It’s the Economy, Stupid, Lincoln Institute of Public Opinion Research: “Should Democrats recapture control in such a manner it would be very different from the Republican take-over of 1994. During that campaign, the GOP – led by soon-to-be House Speaker Newt Gingrich – put forth the ‘Contract with America. The ‘contract’ was a well thought out and detailed document outlining the vision a potential GOP Congress would have for the nation’s future. Americans went to the polls consciously voting for a specific set of ideas. This year, national Democrats have failed to develop anything even close to a comprehensive message.”

Chairman and CEO, The Lincoln Institute