Israel occupied Southern Lebanon for 18 years, it was Israel’s Vietnam… It is commonly regarded as a huge mistake, and it’s still a very raw scar. Nobody wants our soldiers back in Lebanon. 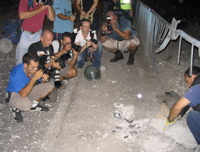 After talking about the Lebanese, Iranian, and U.S. pieces of an increasingly bloody puzzle last night, and with if no let-up in the fighting but perhaps a first glimmer of a possible cease-fire, we’re turning our attention southward, to Israel, tonight.

We’re asking: What are Israel’s goals at this point? Have they changed in the last week — and if so, have they widened… or narrowed? Is the continued bombing of Lebanon increasing or decreasing Israel’s options? How is Israel’s relationship with Hamas and the Palestinian Authority in the midst of this new (old) conflict? And what about Israeli citizens? Are they feeling more hawkish, more dove-ish, or just fatalistic?

Guest List
Daniel Levy
Policy and International Director, The Geneva Initiative, Member of the official Israel negotiating team at the Oslo B and Taba talks, Contributor, Ha'aretz
Ze'ev Schiff
Israel-based associate of The Washington Institute and the defense editor of Ha'aretz
Lisa Goldman
Journalist and blogger
Reading List
This Week in Israel: War?!
Lisa Goldman
Global Voices, July 18, 2006
We watch them and they watch us
Lisa Goldman
On the Face, July 16, 2006
I'm a Bad Daughter
Allison Kaplan Sommer
An Unsealed Room, July 18, 2006
Stay or Leave...?
Faysal
The Thinking Lebanese, July 18, 2006

Regional War in the Mideast: Our Role?

On yesterday’s news that Israel has entered Lebanon and has now bombed the airport in Beirut and laid out a naval blockade, we are wondering (and so is everyone else)...

Click to Listen to the Show (24 MB MP3) Friday Prayer [bethcanphoto / Flickr] More than half of the 250 million Muslims in the Arab world today are younger than 25. The...