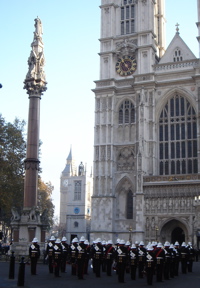 I found it hard to believe, after three days indoors at a conference in London, that I was actually in London. On day four, through the good graces of my old boss, Jake Shapiro of the Public Radio Exchange, I listened to a Royal Marine band play “Rule Britania”; then I took communion at Westminster Abbey. My Episcopalian grandmother will faint with pleasure when I tell her.

I spent four days last week in Oxford and London for the Berkman Center for Internet & Society‘s “Internet & Democracy” conference. I recorded a lot of audio and took a lot of notes, and for the next week will be posting, both to our blog and Berkman’s, some of what I saw. I saw, for example, Richard Dreyfuss — the actor Richard Dreyfuss — wander into several sessions, say interesting things, then wander back out.

Bloggers: Met Lisa Goldman, of Vancouver, New York, Tokyo and — now and permanently — Israel. I learned from Lisa that Israelis who blog in Hebrew don’t talk about the conflict, and that Tokyo is not the best place for a western woman to find happiness. Georgia Popplewell, blogger and podcaster of Trinidad and Tobago, explained that a “Soca Warrior” is a footballer; soca is a dance, and the phrase is a rough analog to Brazil’s “beautiful game.” Neha Wiswanathan Viswanathan [see Neha’s correction below. Sigh. ] was patient with my pronunciation. We recorded a great conversation about identity in India, and she alerted me to the dangers of blogging your own wedding.

Jake Shapiro of PRX, Dan Gillmor, Terry Fisher of the Berkman Center and John Bracken of the MacArthur Foundation at the Frontline Club for a day on Internet filtering [Brendan Greeley]

Journalists: Kevin Anderson of the BBC’s World Have Your Say. If you’re a content dork, Kevin and I recorded a conversation about our two programs, both interactive-tastic in different ways.

Surprises: I care about Internet filtering now. I got tape of Nart Villeneuve of the Citizen Lab at the University of Toronto walking through how various governments block websites from abroad and bloggers from within.

Estonia: A country where it’s possible to file your taxes in twenty minutes over the Internet. And vote online.

24 MB MP3 Lisa Williams (here’s her blog: H2Otown) sent us this show idea: “Knitting has made a huge resurgence among urban hipsters, who have meetups in towns and cities nationwide,...

24 MB MP3 Hyperlocal journalism. We’ve wanted to hit this for a while, since realizing what a great talker Lisa Williams is, since seeing Rob Curley, formerly of the...