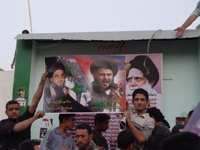 Nir Rosen stays out of the Green Zone. Instead, he lives and reports from what he calls the “Red Zone,” i.e., the rest of the country.

In the three years he’s spent there since the start of the war, he has been much closer to the heart of the conflict than just about any other foreign reporter. He looks Middle Eastern and speaks Iraqi Arabic, so he can pass for a native. He has a network of close friends in Baghdad’s most dangerous neighborhoods, so he can go places that aren’t safe for westerners (but really aren’t safe for anyone else, either).

He’s just returned to the states from another six week stint in the Red Zone, and paints a disturbing picture of sectarian strife, fear, and paranoia.

You have militias operating openly on all sides. Iraq used to be about the insurgency, but the insurgency is now just the Suni militias. They think the Americans are leaving, so now the real fight is against the Shias. And the Shias are fighting back.

Nir Rosen wants to talk about the Iraqi civil war – how intense it is, and how much worse he thinks it’s going to get. He wants to talk about targeted ethnic killings by Sunis against Shias and Shias against Sunis. And he wants to tell us about seeing Muqtada al-Sadr speak before an audience of ten thousand screaming fans (“It was like a Michael Jackson concert”).

After the bombing of the golden-domed Samarra shrine back in February, we did a show about the broad historic roots of sectarian violence in Iraq. Now we’re hoping Nir Rosen can elaborate on that picture in present form, and give us his detailed view from the thick of things.

Author, In the Belly of the Green Bird: The Triumph of the Martyrs in Iraq

Baghdad correspondent, The Independent and The London Review of Books

Author of the forthcoming book, The Occupation: War, Resistance and Daily Life in Iraq

Blogger, Raed in the Middle and A Family in Baghdad

Architect and political canvasser based in San Francisco

Nir Rosen, On the Ground in Iraq: The roots of sectarian violence, The Boston Review, March/April 2006