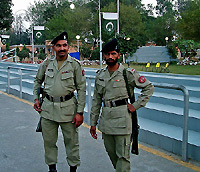 Inspired by a post on Sepia Mutiny titled Ain’t Nobody Here But Us Chickens, we’re taking a look at Pakistan. Suddenly after September 11, the most important fact about Pakistan was that it was an ally. Discover a ring trafficking nuclear material? Pakistan is an ally. Al Quaeda hiding out in the mountains? Pakistan is an ally.

Not that Pakistan isn’t an ally, but what’s going on? Pakistan is implicated in bombings in London and Egypt; President Pervez Musharraf appears in a press conference and tells the world that Al Quaeda no longer exists in Pakistan. Doesn’t it sound like the president is protesting too much?

And then, today, the BBC reports that Pakistan is expelling foreign students from its madrassas. Housecleaning or power consolidation?

Robin here. We’re picking up this show again after last week’s air strike , which killed as many as 18 people (who may or may not have been civilians). One of our potential guests pointed out that this airstrike marks an unusual occurance – military action inside the borders of an ally. It raises a lot of questions we hope to answer in the show, including, why didn’t we ask Musharraf to take out these guys, as we might have of another ally?

Author, Pakistan: Between Mosque and Military

Program Officer, US Institute of Peace

Op-Ed and Features Edtor for the Pakistani daily News International

Pakistan-born Omer Alvie studied in the US and now lives in Dubai. He plans to return to Pakistan –- for good — eventually. Alvie has been turning a critical eye on the American media in his blog The Olive Ream.

I am critical of America because I love it. I’m angry that there are American soldiers dying. You export your culture — we wear your clothes, we speak your language, we watch your Hollywood films — we are part of the scene. I am part of the US scene and so I have a right to criticize the US —- to demand something of it.

Alvie suggests a couple of blogs to understand Pakistan:

What we’re reading for this