Pulse of the PA 6th

Pulse of the PA 6th 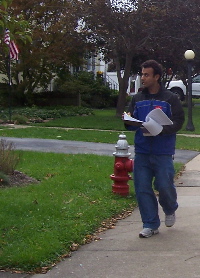 I was in Pennsylvania’s 6th Congressional district over Columbus day weekend, talking to voters in Downingtown, PA, about half an hour northwest of Philadelphia. Candidates Jim Gerlach (R) and Lois Murphy (D) are reprising their roles from the 2004 race, when Gerlach edged out Murphy, 51 to 49% to win what was then an open seat. Both candidates claim that their opponent failed to support armor for troops in Iraq, resulting in a race replete with visceral attack ads.

In Downingtown, small ranch homes and fresh-built condos share streets that trail off into grassy fields and new maple forests. Cheering wafted from a high school football game somewhere in the distance while I walked around the neighborhood, knocking on doors for the Murphy campaign. I don’t think I’ve ever seen a more picture-perfect American town: later in the weekend, I actually saw houses decked out in red-white-and-blue bunting.

The frail, white-haired woman opened her screen door. Her miniature terrier bounced around my legs as she moved ponderously toward the newspaper a few feet up the sidewalk. She spoke in calm sentences, declarations hardly above a whisper.

“My grandson, he has four plates in his face now. He was in Iraq. His humvee flipped over–there was an explosion–and it landed on him and the boys he was with. One of those boys is dead. We sent them over, these boys, and they didn’t have the right armor, and their Humvees didn’t, and it’s just terrible….He’s all right now, he’s at a community college down in North Carolina. He got a help from the V.A. But no, no, I’m a Republican, and I’m going to stay.”

Such prolonged conversations with voters are rare. Most doors go unanswered, and even those who answer aren’t always eager to engage. One man opened the door and laughed immediately.

“We don’t need any of your materials. These politicians, they all have these agendas, and then–none of it gets done. Some of them do try but…”

Downingtown PA resident, in a conversation with Open Source, October 7, 2006.

He laughed again, and the door closed. Of the many rejections I’ve had as a political canvasser, this was by far the friendliest. Some objections are aggressive, or paranoid, and then there’s always simple honesty:

“No, I don’t know who I will vote for, and I don’t want to talk about it. And–” [here her lower lip trembled,] “And you’re interrupting my television.”

Downingtown PA resident, in a conversation with Open Source, October 7, 2006.

Heather Wilson has several things going for her (incumbency, a strong military/National Lab presence here, much better get out the vote for Republicans historically, etc.) that has up to the...

From intern John La Rue: “Tony Knowles carries a lot of baggage from his prior eight-year term as governor, and there are a whole bunch of Alaskans who will not...