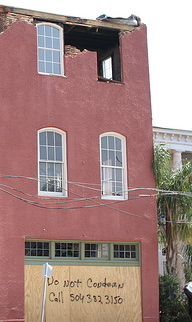 President Bush has promised millions in federal aid to help rebuild New Orleans. How that money will be spent and who gets to spend it has yet to be determined. But the scale of the devastation, and the possibility of rebuilding an entire city from a supposedly blank slate presents quite an opportunity for the creative or the entrepreneurial. Officials are already consulting the big names in design, development and city planning. Last week Mississippi Governor Haley Barbour called in Andres Duany, the prince of New Urbanism, to consult on the rebuilding of the Gulf Coast. And local developers like Pres Kabacoff are talking about their vision for a reconceived and reconstructed Crescent City.

So what’s wrong with this picture? After our last show on rebuilding New Orleans we heard from Fred Starr, whose credits include terms as the Vice President of Tulane and the President of Oberlin. Fred is in D.C. right now, but he owns an antebellum home in New Orlean’s 9th Ward, and he wants to go back. He’s planning on going back. And he can’t imagine that the other homeowners in the city aren’t planning on doing the same.

There’s a bumper sticker now circulating in New Orleans, made by an artist named George Schmidt. It says, “Developers Are Not Our Friends.” The impression I have, and I’m leaving aside the preservation hoo-hah, what my friends are telling me is that the predictable swarm of not only developers and hustlers and demolition people, but of improvers are there. Several university architecture programs have decided to take certain areas under their wing. Nothing has gelled, but the mayor, for the three years prior to Katrina, has been in bed with some big and ominous developers trying to build high rises along the levy. And that’s why as I mentioned to Chris, a lot of federal money was being diverted from the levies to deals with developers. That’s history now. But there is very much a fear that the mayor will get various developers including Pres [Kabacoff] and make deals while we’re all sitting here scratching ourselves.

So here’s one rallying cry of home owners and preservationists, of the displaced and possibly disposessed former residents of New Orleans: beware the developers. Beware the city planners. Beware all the people flocking to the city bulldoze neighborhoods and “start over fresh.” Because if fifty years of urban renewal taught us anything it’s that what gets knocked down does not necessarily get rebuilt, or rebuilt better.

What’s happening with urban revitalization in your city, past, present or future, and what lessons can you draw from it?

[On the phone in New Orleans]

[In studio in Washington, DC]

[On the phone in Atlanta]

Professor, The Graduate Center at CUNY

[On the phone in New York]

To Rebuild or Not to Rebuild?

24 MB MP3 Joel Garreau wrote a provocative article in the Washington Post that’s lit up the Web and — thanks to Potter, our office. We’re thinking about a rebuilding show...