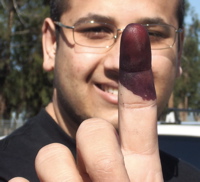 Is this what they were after? [hbushra, The Junior Bushra’s Blog ]

Remind me now — in what look and feel like the ruins of our excellent Iraq adventure: who were those Neo-Cons, and what in the world were they thinking?

On Emerson’s advice that “there is properly no history; only biography,” we are taking a very personal tour of the subject with George Packer, who has covered the war in the field and in the think tanks for The New Yorker. Once upon a time he was a half-way enthusiast. At the start of the US invasion of Iraq, Packer put himself, as he writes, among the “ambivalently prowar liberals.” But reading his book, The Assassins’ Gate, you sense he smelled something fishy from the beginning. And he kept careful notes, all the while, on the bullies and the naifs that were maneuvering the American government into a magic kingdom of illusion. That’s who we’re talking about tonight, also with Steve Walt of the Kennedy School and Gary Rosen of Commentary magazine.

George Packer is more than just a book writer for me. He’s not quite a close friend but he’s a searcher I’ve known and admired for a decade or so, from his African memoir The Village of Waiting to his Cambridge novel, Central Square. Strange as it sounds, I’ve worried about George Packer’s heart and soul in every piece of his journalism–every flirtation, as it seemed to me, with the illusion of war. It may be important to say also that George Packer begins and end his new book on Iraq in conversation with our mutual friend, the passionate and charismatic Iraqi democrat, Kanan Makiya, who gave us an unforgettable hour on the radio last June. Makiya was the first definitive chronicler of Saddam Hussein’s evil–in The Republic of Fear (1989), which I read when it was new. Makiya went on to become an ardent cheerleader for the US invasion in 2003. No one forecast a brighter Iraqi shower of candy and flowers for the GIs than Kanan Makiya did. He wrote that he heard “church bells” when the bombs burst on Saddam’s Baghdad.

So whose idea was it that the United States could deliver democracy on the wings of bombers? How did it become a gesture of idealism to try it? Even now, have we seen through the idea. Who has a better one?

Staff writer at the New Yorker magazine. Author, most recently, of The Assassins’ Gate: America in Iraq.

Managing editor of Commentary magazine. Editor of The Right War?: The Conservative Debate on Iraq.

My friend Kanan Makiya was the most influential Iraqi advocate in America of the war to “liberate” his country five years ago. Today he is the most articulate casualty...