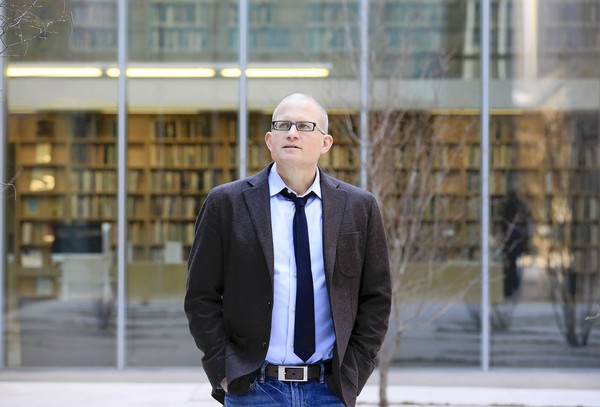 Whose Words These Are: Christian Wiman’s “Wound of Being”

Whose Words These Are: Christian Wiman’s “Wound of Being”

Christian Wiman didn’t plan it this way but his poetry is now entwined with his grave illness and his engagement with God and faith. He grew up in West Texas, amidst the “eyesore opulence” of his poem “Five Houses Down.” He’s lived all over the world, and is based now in Chicago as the editor of the ever-evolving, ever-provocative Poetry Magazine. Our conversation begins around his new book, Every Riven Thing:

Riven means broken, it means shattered or wounded or unhealed, and I think that notion is very important to me and my notion of God and of religion: that we are broken creatures, very broken creatures. And I don’t think of God as necessarily healing that brokeness as much as participating in it.

What disturbed me about these poems is that God is in a way thrust out of them, in fact there’s open contempt for the idea of heaven and the idea of some transcendent God. … I was greatly helped [to understand that feeling] when I came across a quote by Dietrich Bonhoeffer who was a great twentieth century theologian. He said God calls us to be in the world without God, I’m mangling the quote somewhat but that’s the notion.

Christian Wiman tells me in conversation that he finds it difficult to write about God today, in a language of religion that has been so compromised that “even the word God is very difficult to use.” He considers many of the poems in this book to be sort of “anti-devotional devotional poems” that reveal faith even in their apparent repudiation of God. And though his own spiritual life is “very muddled,” Christian Wiman finds a clear expression of “credible belief” in his poetry.

Click to listen to Chris’s conversation with Keith Waldrop. (23 minutes, 11 meg mp3) Keith Waldrop, who just won the National Book Award in poetry for his Transcendental Studies, is a...