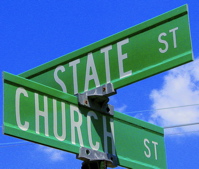 Near the state house in Concord, NH [Ben McLeod / Flickr ]

In thinking about a follow-up to our intelligent design show, we thought we might explore whether meaning and morality can exist without religion. We still want to do that show.

But now we’re also looking into a second follow-up. In the intelligent design comment thread, Jon pointed us to a relevant Rick Santorum interview. At first we figured Senator Santorum might fit into the meaning/morality show, but then we decided it might be more interesting to do a second, separate show with him on Christian America. This idea was inspired in part by Bill McKibben’s recent article in Harper’s called “The Christian Paradox: How a Faithful Nation Gets Jesus Wrong.” McKibben points out that 85% of Americans call themselves Christians and that America is “saturated in Christian identity.” But, he argues, many American Christians have replaced the real Christianity of the Bible — which says “love your neighbor as yourself” — with, among other things, creeds that reflect materialistic individualism.

We don’t want to debate the separation of church and state in this hour, but here are some questions we might ask: If you’re a politician and also a Christian, how should your religion inform your work? In other words: what would it mean to govern with Christian principles (going beyond issues like gay marriage and abortion), and what should be the hallmarks of a predominantly Christian country?

We’d invite a couple of guests to wrestle with these questions with Rick Santorum. One interesting angle might be to include members of the group Christian Exodus, who feel so strongly about living in a society explicitly governed by Christian principles that they’re trying to mobilize Christian families to move en masse to SC — we’ve started a post on them here.

[Robin jumping in here.] At long last this show is back on the table. Questions fresh in our minds: if demographically, traditionally, we are a “Christian nation,” what does it actually mean to govern according to Christian principles? (Our tag line in the office is, it’s not about the Constitution, it’s about the Bible.) Really, what would Jesus actually do? Which passages or issues or ideas are the most important, and how should they be translated into action?

Scholar in Residence at Middlebury College

Author of The Christian Paradox: How a faithful nation gets Jesus wrong, in Harper’s Magazine this past September.

Open Source gues on our shows about New Orleans and climate change in China.

Our recent show with Gary Hart, on the separation of church and state.

Homosexuality and the American Church

Click to Listen to the Show (24 MB MP3) This show records at 5:00 pm Eastern. Maybe you were surprised by the news and maybe you weren’t. Ted Haggard, pastor of the...

Click to Listen to the Show (24 MB MP3) We take up again on Monday the church-and-state question — the Jeffersonian legacy and our Theocracy in America anxieties — with Gary...