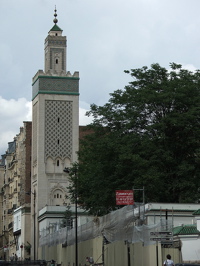 Our show on the French rioters — young disenfranchised Arab and African Muslims enraged by their socioeconomic reality — got us asking lots of questions about the confusing bigger picture here: how are race and class issues different in Europe and in the US? Is it relevant or coincidence that the rioters are mostly Muslims? How are different European countries succeeding or failing to integrate immigrants? Do these immigrants feel discriminated against because of skin color, ethnicity, religion, language, postcolonial history, or some combination thereof? And perhaps most confusing: what’s the significance — especially post 9/11– of the fact that millions of Europe’s immigrants are Muslims?

Usually when we have this many questions, it means we should do a show. And since the Paris riots are arguably Europe’s own New Orleans moment (in the way they’re exposing the dark side of French racism and poverty), we thought it could fit well into our Race & Class series. So post your own questions or answers over the next few days and tune in on Monday night.

Desertrose got us started in the comment thread for the Paris riots show by pointing out that problems similar to those in France exist all over Europe:

The problem of unemployment in the immigrant communities is not only in Paris, but also in many other European cities. The educated immigrants find it difficult to get jobs, although many were born & raised in these countries. Here in Denmark, a last name that is not Olsen or Rasmussen is not going to get your CV noticed.

Professor of anthropology at Washington University in St. Louis. Studies problems of pluralism, law, and religion — focussing on Islam in Asia, Europe, and North America. Author of forthcoming Why the French Don’t Like Headscarves.

Journalist; columnist for The Independent. Born into an Muslim Indian family in Uganda; emigrated to Britain.

Author and TV and radio journalist. Born in Germany to a Muslim Turkish immigrant family; married a non-Turkish German.

Teaches youth and community workers at the School of Education at the University of Birmingham. Born in England to a Muslim Kashmiri immigrant family.

Our July show on Muslims in Europe, which we did after the UK bombings.

Vanessa’s interview with Jawad, a young Muslim living in the UK.

A 2002 article on the formation of France’s Council for the Muslim Religion, founded after September 11, 2001. Includes some interesting quotes from Interior Minister Nicolas Sarkozy, who was widely criticized for calling young French Muslims involved with the recent riots “scum.”

A Brookings Institute paper on immigration in Europe by Virginie Guiraudon, of France’s National Center for Scientific Research.

Current estimate is that Europe is home to more than 53 million Muslims.

Click to Listen to the Show (24 MB MP3) A car burns in Strasbourg [Francois Schnell / Flickr] The remains of a carpet factory in Paris [Matthew Kebbekus / Flickr] What...

A Dutch Canary in the Multicultural Coalmine?

One paragraph stands out among many insightful passages in Ian Buruma’s new Murder in Amsterdam, a meditation on the causes and meanings of the filmmaker Theo Van Gogh’s 2004 murder: By the...