The Dream of Al-Andalus

The Dream of Al-Andalus 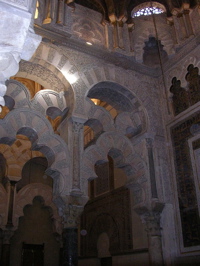 The Mezquita (mosque) in Cordoba, Spain, dates back to the 10th century. [Keith Bonner / Flickr] 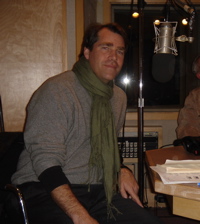 Charlie Sennot, the once and future Globe correspondent, now a Nieman fellow and in our studio for the afternoon [Brendan Greeley]

Christians, Jews, and Muslims do not always get along in this modern world of ours. How’s that for an understatement?

But perhaps there’s a historic moment that all three peoples can look back on as a model: a medieval version of a tolerant, multicultural, pluralistic state. That notion is the dream of Al-Andalus, and the peaceable stewing of cultures that occurred there in southern Spain around the 10th and 11th centuries, when Muslim, Jews and Christians, all monotheistic “people of the book,” lived together in relative peace and stability. During that time (and under Muslim rule) all three peoples experienced a flourishing of cultural exchange still visible and audible in the period’s architecture, music, and literature.

For some the dream of recreating Al-Andalus is, literally or figuratively, very much still alive. And the question there may be less, how did such a time come to be (and how did it last so long) in the past, than how do we bring it back again, today?

In this show we’ll talk about Andalucia – both real and imagined.

A big thank-you to Roger Kennedy for steering us there.

Author, Seeking Madrid Motives in the Cradle of Muslim Glory

Author, The Ornament of the World: How Muslims, Christians, and Jews Created a Culture of Tolerance in Medieval Spain

Expert in medieval and Renaissance music

Integration and Extremism: Muslims in Europe

Click to Listen to the Show (24 MB MP3) Reagan did it. [Ronald Reagan Presidential Library] Our Presidential Power show never materialized, despite a lot of exhortations from our loyal readership, but...