We’re dealing with a very difficult moment in the Arab world. These explosions and disruptions that happen periodically here in Iraq, perhaps in Syria, perhaps in Iran are symptomatic of this greater problem of a region that’s still finding its own identity, and its place vis-a-vis the United States, vis-a-vis Israel, and its own conception of the future. 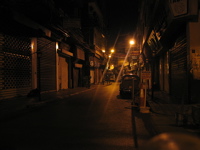 With the conflict between Israel and Lebanon getting worse by the day, we’re pushing the redistricting show back by a week and taking a closer look at the situation, expanding outward in three ever-larger circles:

Anthony Shadid, the Oklahoma-born journalist of Lebanese extraction who last joined us to talk about his reporting from Iraq, will lead off. He’s been writing insightful pieces about Lebanon’s religious and sectarian divisions, their effects on popular support for Hezbollah, and the fragililty of the Lebanese government.

Vali Nasr, author of The Shia Revival, will expand the conversation eastward, past Beirut — and Damascus — to Hezbollah’s financial and ideological sponsors in Tehran — and those sponsors’ larger designs.

Zbigniew Brzezinski will take us home, somewhat literally, with a view of the geo-political ramifications of the current crisis and the the U.S. role.

Author of Night Draws Near

Professor at the Naval Postgraduate School’s Center for Contemporary Conflict

Lebanon: What Happened to the Cedar Revolution?

Click to Listen to the Show (24 MB MP3) My biggest fear in Lebanon is that if the Shiat community takes a major blow, and if the Lebanese government caves to...

Regional War in the Mideast: Our Role?

On yesterday’s news that Israel has entered Lebanon and has now bombed the airport in Beirut and laid out a naval blockade, we are wondering (and so is everyone else)...