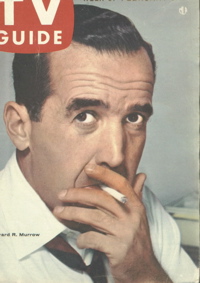 Edward R. Murrow is widely credited with inventing the styles and conventions of broadcast journalism as we know it. First during his wartime radio broadcasts from Europe – from London on the eve of the invasion of Poland and during the blitz, and from the Buchenwald Concentration Camp. Then, as a television reporter for CBS News, when the style and substance of t.v. news was not yet codified. On shows like See It Now (1951-1958) Murrow established himself as the first and probably greatest of the (now) archetypal news anchors – poised, steely, authoritative, and well-spoken.

Murrow the man and the myth is now immortalized in the new George Clooney film Good Night. And, Good Luck. The black and white film explores themes that will resonate strongly with anyone who cares about journalism, or even follows the news. It is, as former NBC White House correspondent Roger Kennedy said to us recently:

…About how journalism changes history. This is journalism that doesn’t become a player, but because of finding truth changes consequences.

We’re assembling a cast of characters made up of the real people from the Murrow era – the folks who were with him in the newsroom or at his side in the field – to ask them about the then and now of journalism, ethics and power. About what it was like to work with Murrow, and about what it’s like to practice journalism now. Because how can we not think of today’s journalistic and political scandals and conundrums in Murrow’s famous words? And where does the new integrity in journalism lie today? Is it in the blogosphere?

Journalists in the Murrow newsroom

Served as consultants to the new film

Shirley Wershba blogs on her life, journalism, and the film for Participate.net

Director Emeritus of the National Museum of American History

Murrow biography from The Museum of Broadcast Communications

From George Clooney’s studio site, Info on the new movie and bios of the real people on whom the characters are based

Boing Boing points to a number of interesting sites, including the Internet Archive, which has documentary films narrated by Murrow, as well as an interview with Fred Friendly from earlier this year recorded in 1990.

Excerpts of more Murrow broadcasts. (Thanks to del.icio.us user samabuelsamid for that link.)

An essay on Murrow written by our guest Joe Wershba. (Tagged by del.icio.us user jermac3.)

Murrow’s 1958 Speech to the RTNDA Convention (which bookends the movie). Tagged by del.icio.us users joleg74 and jparkerny.

Interview with Daniel Schorr in the Louisville Courier-Journal.

Daniel Schorr’s acceptance speech delivered upon induction into the American Academy of Arts and Sciences.

24 MB MP3   Watch the teaser in Quicktime or Windows Media Maybe it’s not the first thing we think about when we hear the term “nation-building” — not when daily bombings are...